Bank of Beirut Celebrates the 49th National Day of Oman! 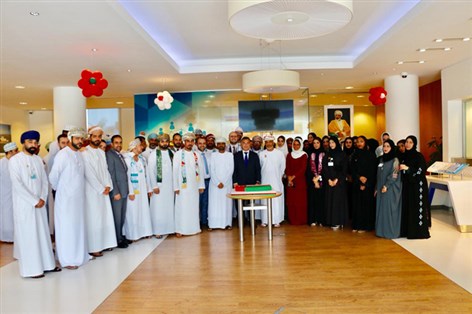 On the occasion of Oman's 49th National Day, Bank of Beirut and its employees celebrated at the Bank's headquarters in Al Ghubra, as well as in all its branches across the Sultanate located in Muscat, Sohar, Al Ghubra, and Qurum. The event included a cake cutting and distribution of Halwa.

The in-branch celebration was followed by a dinner gathering the Bank’s staff at the “W” Hotel. The employees expressed their congratulations to His Majesty Sultan Qaboos bin Said and wished him good health and wellness to remain the leader of the renaissance and development of Oman.

Mr. Elie Nakouzi, CEO of Bank of Beirut in Oman, expressed his pleasure to participate in this occasion, which is close to the hearts of citizens and residents of the Sultanate. He affirmed that Bank of Beirut is proud to have been in the Sultanate for around 13 years, taking part in its economic and commercial renaissance and benefiting from the growth and development witnessed by Oman during its blessed years of renaissance. On the same note, 2 of the Bank’s employees were awarded for their outstanding performance.

At the end, The CEO of Bank of Beirut expressed his sincerest wishes to His Majesty Sultan Qaboos bin Said and the People of Oman on this celebratory occasion of the 49th National Day.